A journal of art and literature

Alice and I were married January 26, 1957, and our daughter Margaret made her debut November 20, 1957. I know you are counting the months, but have no doubts, Margaret is legitimate. This blessed event occurred in Los Angeles, California, where at the time I was employed as a bus-driver for the L.A. County Transit Authority. On that fortunate day, I was driving the bus on my route, when at one stop, another driver gets on to advise me that he was going to take over my route. Apparently, my dispatcher received a call that my wife was in labor and on her way to the hospital. The dispatcher—through the relief driver— further directed me that it was time for me to get going.

I got to Rose Hospital lickety-split and asked the nurse if I could see my wife. She asked for her name, and when I told her she promptly replied there is no one here by that name. I told her, “You are crazy. I got a call saying my wife is in labor, and to go to the hospital, immediately.”

“What the hell is going on? She has to be here. This is Rose Hospital, right? And Dr. Rose is her Physician, right?

“Yes, that is all true sir, but she is still not here. Look sir,” the nurse went on, “this is a small hospital and I know everyone that comes in or out, and your wife simply is not here.”

Bewildered, perplexed, and downright confused, I left the hospital talking to myself and looking for a phone, when a cab pulled up and I heard my mother-in-law’s voice call out my name. And there they were: my wife and my mother-in-law, both wearing smiles on their faces, and me a nervous wreck. It seems my wife Alice had called the dispatcher to advise me that it was time to go to the hospital, but neglected to say that she was going to pick up her mother first. That delay allowed me to beat them to the hospital. After quieting down, I took this event as a sign that this new daughter of mine was going to be something special. And I was right.

Some 7 years later found us living in a three-bedroom home (furnished by the VA) out on Long Island, New York. By this time we have had our second daughter, Diana, and our son, Richie. Our next-door-neighbors were Joe Bovio and his wife, Martha. Joe played the accordion professionally, and his wife sang and played the bass. They went out on weekends to play gigs in addition to Joe’s teaching accordion to the neighborhood kids. It wasn’t long before I asked my daughter Margaret if she would like to take lessons. She took to it like a duckling to water. She started off with a 12 bass small accordion, and soon I found myself shopping for a 120 bass full size accordion for her. To our delight, Margaret proved to be very well coordinated and was reading music in record time. She took lessons from Joe for a couple of years, and by this time I had learned to plunk the guitar. 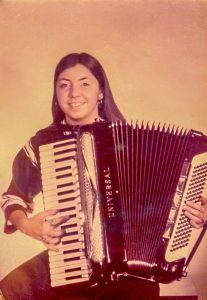 Alice was getting a little homesick for her mother and the rest of her family back in L.A. I knew then even in my relative inexperience that if mama is not happy, nobody is happy. So back to L.A. we went, where we found a home in Redondo Beach, on Artesia Boulevard. We discovered Peggy’s Accordion Studio, and Peggy turned out to be a delightful person and teacher. In no time I had all four children (including Michele, the baby of the outfit) taking lessons. Margaret was playing exceptionally well for her age and handling that huge instrument with ease. If you stood in front of her when she had the accordion on, all you could see was her head, the instrument, and her knees, in that order.

Peggy, the new accordion teacher, advised us of an accordion festival, held each year at the Hyatt Regency Hotel on Century Boulevard, near the L.A. airport. They had trophies of all sizes and shapes and colors for all the different categories displayed on tables . There were categories for everything you could think of: King, Queen, Prince, Princess, Virtuoso, Jazz, Duets, Trios, and Band-Ensembles. The kids were so excited, and I was too. These festivals typically lasted for four days, Thursday through Sunday, by which time everyone is exhausted. The kids all won awards in their respective age groups, and I went home carrying trophies with my chest sticking out a mile. This went on year after year, preparing and practicing all year long for that one day. It was only a few years later that my kids all quit the accordion, except for Margaret.

Margaret and I began practicing together every day. I was, if I do say so myself, a big help to her, as my grammar-school training in music as well as having taken piano lessons for a couple of years gave me a basic ability to at least recognize the difference between a crescendo and a decrescendo. So practicing became a very enjoyable routine for us both. We paid a lot of attention to the dynamics of every piece we practiced together, emphasizing the big crescendo or pianissimo, and nary a grace-note could get by us without giving it due recognition.

The years flew by, and other members of our family joined us to help support Margaret’s efforts. She went on to rack-up top honors in several categories, as well as playing in duets and trios. She developed a great reputation, and the pictures of her and other students being presented trophies in the yearly program booklet made them easily recognizable.

These festivals were a big affair: participants of all ages came in from most of the western states. And when you include the parents and extra members of the family who attended, you have a couple of thousand people. This was never more obvious than on Saturday nights when the dinners were held. This is when (after dinner) they would announced the King and Queen winners, as well as Advanced Jazz Singles, Duets, Trios, Ensembles, Virtuosos, and so on. One of the highlights of the evening was when they announced the Queen winner and presented with a large bouquet of red roses on stage from the previous winner of the year before.

Peggy announced that after only two years she could no longer teach Margaret anything else; she wanted to refer her to none other than Anthony Galla-Rini to continue with her studies. He was well know and revered in the accordion world. He taught people like Myron Floren (of Lawrence Welk fame), Art Van Dam, and other celebrities. He also did musical arrangements for Hollywood movies like Laura and High Noon. We were a little saddened by this abrupt change. But after thinking about it, it was a magnanimous gesture on her part, and we soon became properly thrilled and honored with the decision.

The year is 1974. Margaret is now 16 years old and eligible for the Queen category. After being with Galla-Rini for a time, Margaret’s curriculum had stepped up quite a bit. She played with Galla-Rini’s ensemble, consisting of about eighteen accordions, timpani drums, and xylophones. In addition, Tony, as I came to know him, told us of a play being rehearsed called Fiddler on the Roof, and that they needed an accordion player. He gave us a number to call, and Margaret was soon auditioned. She was hired for the position on the spot. She played four nights a week and twice on Sunday for six straight weeks. The rehearsals prior to the actual performances were just as much fun as the play itself. I came to know everyone’s dialogue by heart.

Tony went on to enter her in the Queen category in the accordion festival held in northern California in July. This is in addition to the one held in southern California in August. Margaret won the Queen category in northern California. Asked the question, “How does it feel to be Queen?” she answered, “My father would be so proud of me.” That response brought down the house, and brought a couple of tears to my eyes when I heard of what she said. I wasn’t there for that occasion as the demands of my employment prevailed. However, in August, we were all there at the Hyatt Hotel, full of excitement from the previous month’s great results and anticipating all of the week’s activities. As for me, I was so jacked-up with all kinds of negatives and positives racing through my brain continuously, that I developed a chronic case of hiccups. For 12 days prior to the event, I had hiccups 24 hours a day. Even in my sleep, or so my wife tells me. Nothing would work in relieving me of this malady. So, I learned to live with it. 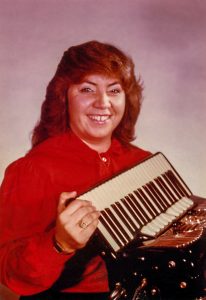 For Margaret, this was the big one: the one she had spent years preparing for. Margaret would be up there on her own, and neither I nor her mother could help her. She had to do it herself. She played for the judges that Friday afternoon, and we had to wait until the following evening after the grand dinner party for them to announce the winners. All the other categories, Jazz, Virtuosos, and others, were announced first. The King and Queen categories remained until the very last. As I remember, I didn’t eat very much, and I relied heavily on Scotch and Soda that evening. I also had to adjust the timing of taking sips of my drink, so as not to interfere with the hiccups.

Then, the moment was at hand. All other category winners had been announced, and all that remained was the 1974 Queen winner. It is typical for them to call all the winners in each category backstage, where they would be ready to pick up their trophies. Earlier, Margaret was told to report backstage. That was a relief, but that is only the first hurdle. While this was a giant step closer, it didn’t mean that she had taken top honors, only that she had placed somewhere. Over the loud speaker came the usual drum rolls and fanfare, and they announced the fourth place winner. A big round of applause went up. Again for the third place winner. Now my mind is really racing. Why they hadn’t called Margaret’s name? It only meant one of two things: she came in second, or that she is in fact the Queen of 1974.

After what seemed like an eternity, they read the second place winner’s name. It wasn’t Margaret’s. I let out a roar (in between hiccups), adding to the din of the crowd for that young lady’s second place achievement. The Queen for 1974 was indeed my daughter Margaret, and as she walked out on to the stage, the whole family, including Tony, jumped to their feet yelling, screaming, whistling and clapping for what seemed like forever. I hugged and kissed my wife, then thanked Tony. On stage, the previous year’s queen came out and presented Margaret with the big bouquet of roses. Our family members included uncles and aunts, grandmas, cousins of all ages, and as far as I was concerned, everybody there was a relative in good standing. I don’t know how far my chest was pumped out, but it must be in the Guinness Book of World records. There are many moments in a father’s life when he is equally proud of all his children, and I have a heart full of thanks in that category. But I must give credit where credit is due, and 1974 was a superb year for this father’s pride (in spite of the hiccups.)